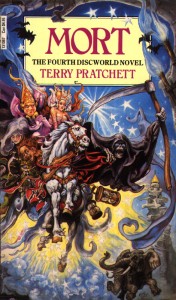 The character of Death appears in every Discworld novel but here, he really gets to shine. He’s a witty and funny character who speaks in capitals and struggles to get to grips with humanity. Witness the hilarious part when Mort says ‘My granny says that dying is like going to sleep’, to which Death sharply replies, I WOULDN’T KNOW. I HAVE DONE NEITHER.

The whole concept of the book is such a perfect comedy set-up. In many ways, Mort and Death are the fantasy fiction answer to the Odd Couple. Although, Death and anyone else would be the Odd Couple. But not only is the book painfully funny at times, it’s also full of exciting set pieces. The finale scene where Mort and the villain battle it out in Death’s Hall is a stand-out scene that I still think of sometimes, even all these years later. The hall is full of sand-timers on shelves, each timer representing a Discworldian’s lifespan. As the battle rages, they knock over several timers; cut to views of the poor people dropping dead across the land. It’s equally hilarious and terrifying – more exciting than several Hollywood blockbusters rolled into one.

Speaking of which, Disney is in the middle of adapting Mort, with the directors of Aladdin attached. Here’s hoping it’s good. Because they wouldn’t want this vengeful ‘anthropomorphic personification’ on their trail…

I DON’T KNOW ABOUT YOU, he said, BUT I COULD MURDER A CURRY.

One Response to “Books I Like #2: ‘Mort’ by Terry Pratchett”