I’m going to avoid rants on this blog as much as possible but decided to write a review of Bridesmaids for one simple reason; to balance out the reviews it’s been getting so far.

Let me start by saying that I have a lot of time for Kristen Wiig. I think she’s a great comedy performer and an amazing writer. For me, she’s the highlight of Knocked Up (another Judd Apatow-involved comedy I dislike) and her brief cameos on HBO’s Bored to Death are hilarious. Going by the rave reviews Bridesmaids has been getting – (even better than The Hangover) – I was looking forward to seeing this. I just left the cinema an hour ago and I couldn’t be more disappointed. 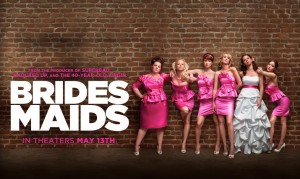 All the genuinely funny bits appeared in the trailer. Throughout the entire two hours I only laughed out loud once. Like all of Judd Apatow’s stable of comedy films, it suffers from a tendency to be over-sentimental without actually making you feel for the characters; and all of this takes away from the true comedy. There were so many moments that felt like they were the set-up for a gag that never followed through with the punchline. For instance, one character suggested a Pixar themed bridal shower but never expanded on it. Then there’s the underuse of some great comic actors. Michael Hitchcock, Wendy McLendon-Covey, Ellie Kemper and Matt Lucas all don’t get a proper look-in. Ellie Kemper plays Erin in NBC’s The Office, a virtual carbon copy of the character she plays in this, with one major difference. Erin is a sweet, naive and side-splittingly funny character, while here, she’s just a bit dumb. And don’t even get me started about how bland Rose Byrne was. This was meant to be the character we hated but I was just ambivalent towards her throughout.

Meanwhile we’re treated to constant reminders that Wiig’s character has given up her passion for baking. There’s even one 2-3 minute scene of her baking a cupcake for herself. I just wanted to shout at the screen ‘Okay! We get it, already!!‘

I said at the start that I wanted to write this to redress the overwhelmingly positive reviews that are elsewhere. This really is the most over-rated film you’ll see this year. It’s all just so painfully average.