Somewhere at home, in my parents’ house, under my old bed or under stacks of broken toys in one of the wardrobes or under Christmas decorations in the attic is a box of books. There are, I would guess, 40 or 50 of these paperbacks, all the spines broken, the pages dog-eared and the covers worn. Most of them cost £3.99 at the time although as the years went by, this rose to a staggering £4.99. They all have gaudy, illustrated covers reminiscent of seventies and eighties cheap slasher films. These books are Point Horrors. 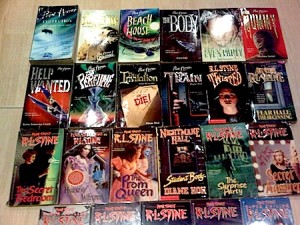 The first book I read in the series was The Babysitter by RL Stine. I don’t know what age I was – (although I’d make a guess at 10) – but the books were all about 15 and 16 year olds being stalked by serial killers or murderous ghosts and I was probably too young. From the moment I picked up The Babysitter, the Point Horror books were a constant companion for the next few years.

I can still remember the plot of The Babysitter today. Jenny is – surprise, surprise – a babysitter. She’s been getting strange phonecalls. It turns out they’ve been from the dad she’s working for, Mr Hagan (whose name is burned into my memory banks). Finally, Mr Hagan tries to throw poor Jenny into a quarry. She ducks and he goes down instead, dying. There were three sequels to The Babysitter and I made sure to read them all. I can’t quite remember books 3 or 4 but have a sneaking suspicion that they may have introduced a massive twist and/or ghosts.

Another book that I’ll never forget is The Forbidden Game by LJ Smith. In fact, for years, if anyone asked me what my favourite book was, I would inevitably name-check this one. We meet Jenny – (another Jenny; there were a LOT of Jennys in Point Horror, I recall) – who buys The Game from a punk with sparkling blue eyes called Julian – (there were also a LOT of Julians). This is more than any other board game though and soon her and her friends are playing for their lives. It was the first Point Horror I read that felt properly epic and was the first part of a trilogy. The other two weren’t quite as surprising but were still fun reads.

Point Horror also released a series of books on tape; all dramatized with sound effects and music. I did get a few of them and listened to them on long car journeys. Have a listen to Funhouse by Diane Hoh, which I couldn’t remember until I started listening just now.

That’s the thing about the Point Horrors. Some of them I will never forget; like The Babysitter or Beach House or The Perfume or The Cemetery or The Forbidden Game trilogy. While some of them were disposable, unsurprising slashers. But all of them, in a weird way, helped shape who I am today and what I do today. They taught me about classical three act structure like nothing else could and they taught me about tension and cliffhangers and scaring the reader.

By the time I was 14 or 15, I had moved onto Christopher Pike who seemed much more grown up now than any of the Points ever did. I only stayed with him for a year or so before reading my first Stephen King. From then on, it was adult horror all the way. But every time I watch a slasher film – (and I’m talking a good slasher like Scream and not a pointless torture movie like Saw) – I am brought back to my childhood, to my Point Horrors and all the endless, spunky heroines; the endless, spunky Jennys.

Incidentally, RL Stine went onto huge fame with the Goosebumps series, which, by the time they were out, I read but was really too old for. And LJ Smith is experiencing something of a renaissance thanks to the success of the TV adaptation of her Vampire Diaries series. I’m still holding out hope for a Forbidden Game movie or series. I’d like to see the books getting re-released with brand-spanking new editions, or better yet, the same covers I grew up with. What with the success of teenage paranormal romance books like Twilight and the aforementioned Vampire Diaries, it seems like it couldn’t be better timing.