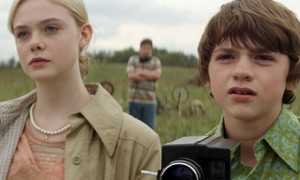 With an early eighties setting – along with some nice post-disco touches – the film is reminiscent of Spielberg’s hay-day.

Spielberg has lost his touch since Jurassic Park. His films have lost that certain magic they once had. But Super 8 is the best film Spielberg never made (although he did produce it). The score is spot on, reminding me of all those great eighties family films like Close Encounter and Back to the Future. And most viewers are instantly reminded of The Goonies on seeing the group of young filmmakers.

The action is fun, the humour keeps going throughout and the effects (and lens flare!) are used surprisingly sparingly. Even the cringe-worthy METAPHOR at the end didn’t ruin the experience for me. In fact, I only have one bad thing to say about the film. Throughout I was completely buying the authenticity of the eighties setting but in one scene a character makes a note of laughing at the idea of a Walkman. It’s a small thing but it just reminded me that this is actually a parody and not a genuine eighties film.

This is well worth catching and be sure to stay for a minute into the end credits to catch the hilarious home-made film the characters came up with.