Back in the early nineties, my uncle who lived in America at the time brought back a book for my younger brother Paul. It was the Best Word Book Ever by Richard Scarry. Paul loved the book (mainly because it had pictures of fire-fighters!) and I remember flicking through it myself from time to time. I don’t think it was ever sold in this side of the world. I never saw it in any bookshops then and haven’t now. 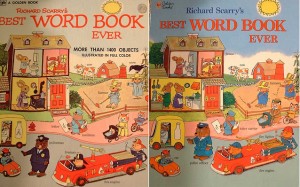 Anyway, this flickr account grabbed my attention when I stumbled on it. Turns out that there are two versions of Scarry’s book. The first was released in 1963 and then his revised version came out in 1991. (We owned the revised version.) It’s interesting looking at what he decided to change nearly thirty years later and will tell you a little about how the world changed too. Have a look.

2 Responses to “Then and now”