Recently a group of girls in my hometown of Mohill set up their own Jacqueline Wilson Girls Book Club. The boys wanted their own so an enterprising bunch established the Boys Book Club and they named it after yours truly!

I can’t stress how honored I was when I heard and I was of course delighted when the librarian Aoife invited me to speak. So I met both clubs today – (the girls also wanted to come along) – and I had a wonderful time. I gave them a sneak peek of Arthur Quinn and Hell’s Keeper and at the end, club founder Scott presented me with an application form. I promptly filled it out (co signed by a parent of course!) and am now an honorary member of a book club bad named after me. Which is slightly weird but INCREDIBLY COOL.

Thanks to Aoife and all in Mohill library for a fantastic time! 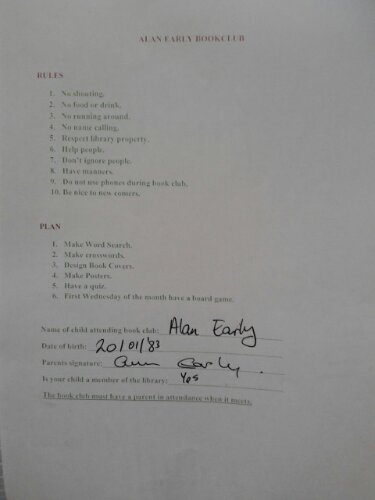