There were two films that really scared me as a kid – and both of them had one rather unusual feature in common.

‘The Witches’ and ‘Ghostbusters 2.’

Let’s look at ‘The Witches’ first. Remember the scene where the grandmother tells Luke about her first encounter with witches? If you don’t, just watch the clip below.

That clip ended a little bit sooner than it should have. After that, the grandmother told us that the girl in the painting would change positions from time to time but nobody ever saw her move. And freakiest of all, she got older and older, until one day she simply wasn’t there anymore.

Why did I choose the film over the brilliant book? Because in the film we got to see the painting. And in my parents’ house, we had a painting of a cottage in the woods just like that one, which you can imagine I was terrified of. I honestly think that the clip above is one of the most frightening scenes in cinematic history. Getting trapped for eternity in a lonely painting is such a horrifying prospect. It’s the stuff of nightmares.

Which brings me to ‘Ghostbusters 2’, which also had a person trapped in a painting at its core. Except this time, the person trapped is the evil ghost Vigo the Carpathian.

I loved everything about ‘Ghostbusters’ growing up; the cartoon, the toys, the first film. So I couldn’t wait to see the sequel when it came out. I went to the cinema with my mother and brother. I took the aisle seat and waited to laugh and jump in equal measures. And this was all going so well, until Vigo stepped out of the painting.

I distinctly remember that moment. It’s stayed with me more than any other cinema-gonig experience. Sitting there, in the aisle seat, I was convinced that Vigo was going to come walking down the steps from behind to get me. I even looked over my shoulder a few times to make sure he wasn’t there.

Thankfully he wasn’t. But even to this day, if I see a painting like the one in ‘The Witches’ or a poster with Vigo’s snarling face on it, I can’t help but swallow drily, avery my gaze and hurry away.

So with that, I’ll wish you all a HAPPY HALLOWE- Wait a second! There’s a painting over my desk I never saw before…

I think I’ll just take a closer look. Be right back…

So, as in the previous posts (World Serpent and Fenris Wolf), here’s a little sample of the music I listened to while writing ‘Arthur Quinn and Hell’s Keeper’ and that you might like to listen to while reading it.
I don’t want to give too much away about the book so really can’t go into why this music is important. However, I’ll tell you as much as I can.

Fuori Dal Mondo – Ludovico Einaudi
This is a really beautiful piece of piano music that I first heard in a film called ‘This is England.’ I listened to it a lot while writing the first five or six chapters of Arthur Quinn and Hell’s Keeper? Why? Well, it fits the tone of those early chapters I feel. It’s sad and melancholy but with a definite urgency.

Container Park – Chemical Brothers
You’ll notice that there’s a lot more film score this time around. I think it’s because a thumping film score like this works really well in action-driven scenes. This piece, from the movie ‘Hanna’ really suits the middle portion of the film. It’s a bit weird and creepy but it’s also got that urgency again. Chapters 9 onwards…

Omen – The Prodigy
This track kind of has lyrics but it’s still quite instrumental. I listened to it on repeat for the big finale (which lasts for about the last five chapters!) It’s really fast and kicking and I feel it perfectly reflects Arthur’s mindset at the end of the series. He’s not going to let Loki get away anymore. This time, he means business!

One Day Like This – Elbow
When I was writing the final ever chapter of Arthur Quinn, I had this song on repeat in the background. It just fits.

So that’s it! The final reading soundtrack for the final Arthur Quinn book! I hope you enjoyed listening to them as much as I enjoyed writing to them.

If there’s any music that you really like listening to while reading the books, let me know. I’d love to get some more suggestions!!

This short goes on a bit at the end but is still a really sweet little film. Thanks to @didotdesigns for the heads up!

I’m often asked what my favourite book as a kid was and I’ll always answer: ‘Matilda’ by Roald Dahl. I love the dark humour, the tenderness of Miss Honey and Matilda’s friendship and I love how scary it is in the final ‘blackboard’ scene. So, also being partial to the odd musical, I was very excited by the prospect of Matilda: the Musical.

The show managed to exceed my already high expectations.

It’s running in the West End of London now (and is opening on Broadway in 2013) and won a record breaking number of awards in the short year it’s been there. If you’ve read the book or seen the film, you’ll know the story already. But the writing team of Dennis Kelly and Tim Minchin (yes, the comedian musician Tim Minchin) took the fantastic novel and expanded on it in all the right places. I won’t give too much away but they added a really ingenious subplot between Matilda and her favourite librarian. END_OF_DOCUMENT_TOKEN_TO_BE_REPLACED

As I wrote in a previous post, music plays a big part for me whenever I’m coming up my stories. Sometimes I listen as I write but generally it’s whenever I’m strolling around the place, earphones in, world shut out and thinking about the various adventures Arthur gets up to.

There’s a bit more music mentioned in ‘Arthur Quinn and the Fenris Wolf’ than there was in ‘World Serpent’ so I figured I’d list some of the tracks that inspired the feel of the story. Some of you may like to use this list as a kind of soundtrack for reading, while others may just be interested in the songs that I had in mind, while even more of you will probably say that this is a boring post and that you have no interest in it.

Regardless… Here are the tracks.

When we first meet Arthur in ‘Fenris Wolf’, he and his friends are at a bowling alley. In the book it says that a pop song from the 1980s is playing. I only really had one track in mind when I wrote this – ’99 Red Baloons’ by Nena. I really like the way the song starts; slow at first and then kicking right into it with a fun beat. If this was a film, I imagine the prologue ending with that quiet part of the song before we arrive in the bright and colourful world of the bowling alley. The song is so upbeat that it works as a perfect contrast to the scary thing that happens later on in the chapter!
END_OF_DOCUMENT_TOKEN_TO_BE_REPLACED

Anyone who likes the Disney classic Beauty and the Beast will probably love this ghetto version. (Warning: there is a little NSFW language)

I’m sure you’re familiar with the Pixar intro where the cute little lamp (Luxo Jr I believe his name is) comes along and bounces on the ‘I’. Anyway, College Humour have made a parody of the famous intro full of dark humour. Enjoy!

Warning: you may never look at little Luxo Jr the same way again!

I’m a big fan of Mad Men. One of my favourite characters is Ken Cosgrove. He’s often overlooked but I like him because, although he’s just a boring accounts guy at work, he secretly writes short stories at home. The creator of Mad Men has said that the series will end in the modern day and we’ll get to see what all the characters are up to. I always get the feeling that Ken will have left the advertising industry to become a full-time and very successful author.

Anyway, I read this blog and it reminded me a lot of Ken. Turns out Dr Seuss worked in advertising before becoming a children’s author.

Fans of His Dark Materials will love this real life althiometer. 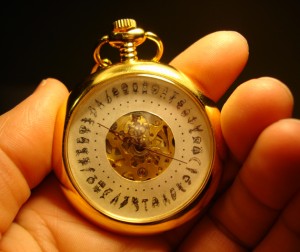