I’m often asked what my favourite book as a kid was and I’ll always answer: ‘Matilda’ by Roald Dahl. I love the dark humour, the tenderness of Miss Honey and Matilda’s friendship and I love how scary it is in the final ‘blackboard’ scene. So, also being partial to the odd musical, I was very excited by the prospect of Matilda: the Musical.

The show managed to exceed my already high expectations.

It’s running in the West End of London now (and is opening on Broadway in 2013) and won a record breaking number of awards in the short year it’s been there. If you’ve read the book or seen the film, you’ll know the story already. But the writing team of Dennis Kelly and Tim Minchin (yes, the comedian musician Tim Minchin) took the fantastic novel and expanded on it in all the right places. I won’t give too much away but they added a really ingenious subplot between Matilda and her favourite librarian. END_OF_DOCUMENT_TOKEN_TO_BE_REPLACED

Last week I went to Edinburgh for the first time. It’s a beautiful city and if you have never visited, I highly recommend it.

Here’s what we got up to.

We saw lots of nice architecture. 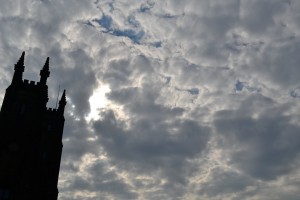