I saw this trending on Twitter so I thought I’d give it a go here.

1. I have one sibling; a brother called Paul.

2. I am from Leitrim originally, a town called Mohill.

3. I am the eldest of all the cousins on both sides of the family.

5. I can touch-type (learned in Transition Year).

8. I was once on RTE’s answer to Blue Peter, Echo Island. I was on the Hot Seat Quiz where I answered questions on the Meryl Streep film, The River Wild.

9. My father is an undertaker, as his father was before him.

10. I almost appeared in Katherine Lynch’s second series as an extra with my mum. But she laughed so we were cut.

END_OF_DOCUMENT_TOKEN_TO_BE_REPLACED

The World Street Performance Champtionships are taking place this weekend in Dublin (starting today). On Saturday and Sunday they’re trying to break a world record to get the most Where’s Wallys in one photo at one time.

To get in the mood, I thought I might share this fun Where’s Wally (or Waldo for our American friends) game. 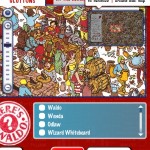 I stumbled across this great illustration blog called ‘Terrible Yellow Eyes.’ It’s all work inspired by Maurice Sendak’s excellent ‘Where The Wild Things Are’. Have a look.